Kirsty Griffin on the making of her award-winning doco 'Pluck' 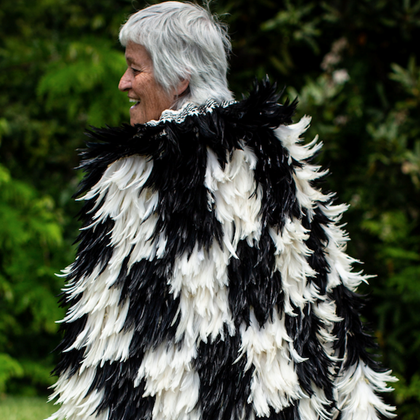 As any documentary maker knows, a story can change in the blink of an eye. Or, in the case of Kirsty Griffin and Viv Kernick's Pluck (available to watch here), in the diagnosis of a terminal disease. The documentary, which won Best New Zealand Short Film at the 2020 Doc Edge Awards, is about Thames grandmother and craftswoman Jean Neshausen who weaves korowai - traditional M?ori feather cloaks - for her community.

The documentary journeys with Jean as she travels to the windswept Chatham Islands to gather weka feathers to make a cloak for her daughter. Only it didn't start out that way.

Thames-based Kirsty and Viv met Jean at the Saturday market in Thames where she and her friends were raffling a korowai to raise money to travel to the Chatham Islands to get weka feathers to make more korowai.

"There were about seven of them, all aged over 70. We asked if we could go with them and film them," recalls Kirsty. "I shared a room with Jean on that trip and I thought she was pretty interesting. We started shooting not really knowing where the story would go. We thought the fact that Jean was good at this one thing and that it was a major passion for her might be enough. We had no idea all that other stuff was going to happen."

The "other stuff" was Jean's 2015 cancer diagnosis. Jean became very ill, and Kirsty and Viv were resigned to the fact the film wouldn't pan out. However, after a round of chemotherapy, Jean bounced back - and she had a mission: she'd made 15 korowai for people in her community, but now she needed to make one for her daughter. This mission involved another trip to the Chatham Islands for more weka feathers. Suddenly Viv and Kirsty had their story.

"The story happened, sadly, when Jean got sick and had her mission to complete the korowai," says Kirsty, who co-directed and co-wrote the documentary with Viv. "That's doco making - finding the angle that makes your subject different at that time. The film could have ended up being a story about a group of  feisty adventurous kuia having fun in the Chathams but it wouldn't have been half as engaging."

The pair didn't want Jean's cancer and its treatment to loom too large in the film. The scene of Jean in hospital getting chemo is filmed through a door; you hear her talking with the staff; dissolves show the passing of time.

"When we went to film her having the chemo, I wanted to show her at her most vulnerable, to see people fussing over her - usually she was the one fussing over other people," says Kirsty. "But it was a conscious decision to pull the camera back and not be in there with her. The cancer didn't define her as a person at that time. I didn't want to make it bigger than her precisely because she didn't let it."

"We'd do it when we had the time because we were still working and trying to earn a living," Kirsty says. "We'd ring her and ask, 'what are you doing?' and she'd say, 'I'm washing some feathers' or 'I have a few birds to pluck', so we'd ask if we could come and film her. We asked if she could ring us when she was doing something important, and mostly she did."

However a determined Jean made the trip - bundled up against the wind, her thinning white hair under a woolly hat. And it seemed she'd timed it just right.

While Kirsty, Viv and Jean are driving in a land rover along an unsealed road on R?kohu in the Chathams, a local called Johnny Rotten (yes, that is his real name) stops them to talk. Jean explains through the window what she's doing and Johnny mentions he has bags of weka feathers she can have. The unplanned scene is a turning point in the story - and only just made it on camera.

"We just had the on-camera mic and so we had to quickly turn off the engine," Kirsty recalls. "That's why we animated the beginning [of that scene] because we didn't actually shoot it."

The film uses animation to help tell some of Jean's stories - and she had many amazing stories to tell, says Kirsty, including one about 200 dead pukekos being delivered to her. "Jean is a very funny person, but we didn't just want to show her saying these stories."

Because there there was so much to tell about Jean, the pair faced a challenge when editing, and Kirsty says leaving out Jean's descriptions about her "survivor" past was hard, but she realised they detracted from the film's focus. She hopes more stories about women of Jean's generation will be made.

She and Viv would love to see more funding for local documentaries, particularly on older women, and reckon short form - 15-25 minutes - is more achievable, cheaper to make, and something audiences would respond well to.

"Dramas are great but docos are exceptionally great for [telling stories about] real people. [They're] intimate portraits of ordinary people who have a passion, and who will document our people if we don't?"