The Award will be presented at the Wairoa Māori Gala Film Awards at the iconic Gaiety Theatre, Wairoa, on Sunday 25 October. 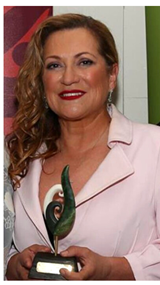 Nicole (Ngāti Kahu, Te Aupāuri) has been a leader in te reo Māori broadcasting for the past three decades.

In 1997 she created the Koina Te Kōrero campaign around Māori place names for TV3, putting Māori language into primetime for the first time on that mainstream network for the past thirty years through her company Cinco Cine. After a decade of producing award-winning commercial work for international and domestic clients, Nicole switched Cinco Cine's focus to normalising and revitalising te reo Māori via television, film and later digital media.

Nicole has not only produced thousands of hours of television, film and more recently online content, she has also provided opportunities for hundreds of Māori to develop production skills, alongside their te reo.

Programmes like the award-winning Pūkana, Kōrero Mai and Te Uru Whetu have helped boost the careers of a generation of Māori musicians, including Aria, Teeks, and Maimoa Music.

Alongside this, industry heavyweights such as Reikura Kahi, Kawariki Morgan, Quinton Hita, and Matai Rangi Smith, have all come through the Cinco Cine whānau.

As well as helming her company, Nicole has held several board positions in the screen industry: Board Member and Acting Chair of New Zealand On Air, Deputy Chair of the New Zealand Screen Council, President and an executive member of SPADA (the Screen Production and Development Association), Treasurer of Ngā Aho Whakaari and an Executive member of WIFT - Women in Film and Television.

Nicole has devoted her life and career to advancing and enhancing te iwi Māori, and te reo me ngā tikanga Māori, and is a truly worthy example of Mana Wāhine.

The WIFT Mana Wāhine Award recognises and supports the achievements of Māori women in film and television who work tirelessly, diligently and with vision to support and promote Māori culture, te reo Māori, tikanga Māori and the welfare and stories of wāhine.

The Award was first initiated in 2011 by Wairoa Māori Film Festival director Leo Koziol and his mother Huia Koziol.

Tickets for the Awards Gala and Film Festival can be booked at Eventfinda - Māori Film Awards only $50, Full Festival Pass including Awards $150.

The 15th Wairoa Māori Film Festival has over 60 short films and 10 feature films, all screening at the Gaiety Theatre over four days, from October 23rd to 26th 2020.

There is a strong Pacific focus with two short film programmes, and feature documentaries Loimata - The Sweetest Tears, directed by Anna Marbrook, and Tupaia's Endeavour, directed by Lala Rolls.

The festival awards this year will be presented at a special 15th anniversary celebration dinner at the Vista Bar & Grill.

Wairoa Māori Film Festival is partnering with film festivals around the world in presenting this year's programme. Solid Screen Film Festival run by Jenny Fraser in Australia will present a collection of shorts on Friday, as will also the Whakapapa Film Festival of Italy run by Joseph Rickit.