On one blood-stained night a drug deal gone wrong sets off a chain of events for dangerous factions and an innocent bystander. Welcome to Vegas – the new TVNZ 2 action thriller produced by Greenstone TV and written by Michael Te Arawa Bennett, to start screening 19 April.

Filmed in Rotorua, which stands in for the town of Wairoto, the six-part series stars WIFT member Cian Elyse White as Toni Poulan, the local tavern owner and a solo mother, whose character is pulled into a world of crime when competing crews decide to use her bar for a million-dollar methamphetamine deal.

Greenstone TV Head of Drama Harriet Crampton is immensely proud of Vegas, not just for its themes of anti-colonisation and the humanising of gangs, but also for the collaborative way in which it was made.

“What we have achieved is something completely new for television in Aotearoa,” she says.

Rotorua film collective Steambox teamed up with Greenstone TV and Bennett’s 10,000 Company to advise on everything from story to location and design.

Crampton says Vegas would not have been made if Steambox had not been keen to partner with Greenstone.

"So much richness was added to the show, and the partnership ensured the production had an authentic voice."

One example of that richness and authenticity is while filming a scene where someone’s mana is taken from them by having food rubbed onto their head. 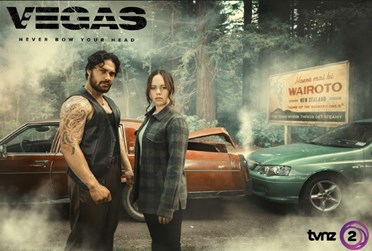 “It was in the script but in agreement with Steambox we decided not to use real food so we wouldn’t compromise the mana of the actor.”

However, that decision clashed with Screen Industry Health and Safety rules because the safest thing to rub onto a person’s head, Crampton says, is food.

“But Steambox pointed out that in this instance, spiritual safety was more important. We’re hoping to get this into the screen safety requirements because you don’t take someone’s mana lightly in Aotearoa.”

The collaborative approach meant that “nobody’s opinion was louder than anyone else’s, including mine”, says Crampton.

There were also other factors to consider such as being able to use the name Vegas in relation to the area.

“We had a script reading in Rotorua, reading the first two or three episodes in a group that included kaumatua Ngamaru Raerino, and Sir Toby Curtis (New Zealand educator and Māori leader). At that point Sir Toby agreed that we could use the name Vegas.”

Having Māori on the job was the number one focus, and Māori artists make up 65% of the Vegas cast and crew. Women make up 40%, but it’s good to note that another recent Greenstone production Tender Trap, achieved a 62% female crew.

However, it’s the fact that the production saw 16 rangatahi from Rotorua take on junior crew roles that satisfies Crampton most.

“These young people now have a future in the burgeoning film and television industry in Aotearoa, and of all the achievements Vegas can lay claim to, this is the single one of which I am most proud.”