"Making a film by committee can be done. You end up with a film with far more complexity and humanity." - Ainsley Gardiner, co-director of Cousins.

As a producer Ainsley Gardiner works mostly behind the scenes, but her latest film Cousins sees her in action behind the camera.

Ainsley, who is of Te Whānau-ā-Apanui, Ngāti Pikiao and Ngāti Awa descent, co-directed Cousins with the film's writer Briar Grace-Smith (who also plays the part of Makareta). Ainsley also produced Cousins, along with Georgina Conder and Libby Hakaraia, director of Māoriland Film Festival.

Adapted from the 1992 Patricia Grace novel, Cousins spans six decades, telling the story of three cousins who, when separated, spend a lifetime searching for each other.

We spoke to Ainsley about the joys and the frustrations of co-directing, and what honouring indigenous stories in filmmaking really means.

Why did you want to make this particular film?

I'd read the book a long time ago as a student and it was the first time I'd read anything with Māori women as the protagonists. Then about 17 years ago my mentor Merata Mita, who had the rights to make the film, showed me her script. It was beautiful. The book has a really strong, beating heart, and Merata's script captured that and the poetic nature of the novel. I thought it would be a film that I'd want to watch. It was unlike anything in cinema at that time.

When Merata passed away [in 2010], I made the film The Pa Boys which Merata was planning to produce - I felt a strong sense of duty to her to get that film made. And similarly I had that voice in my head reminding me that Cousins had never been made. In 2015 I investigated where it was at and found it in a complicated state, what with all the hands it had passed through. I talked to Patricia Grace and said I'd like to get it made. I talked to Briar, and she wanted to write it. As always there was a convergence of time, skills and wairua that brought us all together at the right time. 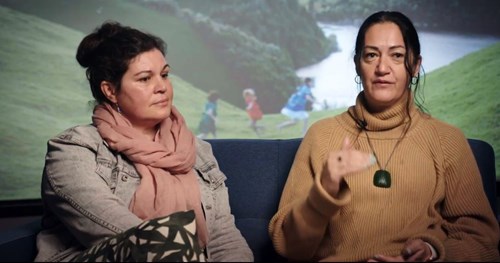 So it's taken a couple of decades for this film to be made…why is that?

For the last hundred or so years we've been given one recipe for storytelling and it comes out of the Hollywood western patriarchal paradigm. But indigenous filmmakers have other ways of storytelling. However, funding organisations have their way of measuring the work and it didn't pan out for Merata at the time. I suspect there was also hesitation from the New Zealand Film Commission in supporting Merata -  she was a feisty lady. It would have been tough terrain for her to negotiate; she would have known the film she intended to make and would probably have been inflexible, and I imagine the NZFC would have been inflexible too. But the world has opened up a little bit now to different types of storytelling.

What challenges did you face?

Ensuring that tikanga Māori was properly adhered to was sometimes challenging. For example, when we had to shoot the betrothal scenes the local hapu didn't know of any specific tikanga for us to follow, so we had to make up the vision for this betrothal - Briar and I, Patricia and the local kaumatua. Normally you just don't have the time to take the time to work through these things - but it was a very important aspect of making a Māori film by Māori filmmaking methods.

We also had to shoot some scenes in Rotoiti because my local iwi trust organisation in Rotoiti gave the film some financial support. But we had huge support from the local community there - the cast and crew, the local marae, so whatever challenges we had were met with goodwill.

There was a huge amount of goodwill from everyone for the whakapapa of this film, you know, it was helmed by two Māori women, 90% of the speaking roles were for women, the fact it was Patricia Grace…

It was probably the inverse of that for Merata.

Tell us about co-directing - how did you and Briar make it work?

The most challenging thing was co-directing, and one of the things I'm most proud of is how we worked to create and maintain a truly collaborative relationship.

After working on Waru* together, Briar and I recognised that for women, and certainly wāhine Māori, filmmakers, there's a natural tendency to collaborate. We seem to work best collaboratively, we resolve issues collaboratively. We also thought it would represent more of an indigenous process for us to co-direct.

For most co-director relationships it's often a battle of wills, of egos, and often one party will dominate. We committed to a flat hierarchy, a structure that would honour the structure of the marae where each person has a role - there's a person digging the hangi pit and someone running the kitchen, but neither one is more important.

Briar and I had to work really hard to set our egos aside and also to invite the spirit of that flat hierarchy into our whole crew.

When Briar and I didn't agree we'd have to stop and wananga, discuss, and find a place where both of our perspectives could meet, and include the perspectives of everybody else party to it - the actors, the DOP, the kaumatua…

Making a film by committee can be done. You end up with a film with far more complexity and humanity.

*In the portmanteau film Waru, Ainsley wrote and directed the segment about solo mum Mihi.

Briar and I had known each other for a long time, we had a lot of back story together. She had been writing the film for five years, and I'd supported her in the development process, so we'd developed our relationship and had mutual respect for each other. We ended up with a simple and elegant and practical way of approaching co-directing: I empathised most with the character of Mata who is disenfranchised from her community and her sense of being Māori, which speaks to my experience, while Briar, who is more deeply held in her Māori upbringing, was most attracted to Missy, the grafter, and the often overlooked youngest child.

And even though she did the talking when it was her turn and I did the talking when it was my turn, we still talked together all the time. We were shoulder-to-shoulder and there was a lovely sense of having each other's back. And that's what it came down to - we had each other's backs, even when we disagreed. It's a bloody lovely way to work! To really feel held and supported as women is a massive part of our being. It allows us to be strong, vocal, confident. For a lot of people, the idea of co-directing is so adversarial and competitive; it's about how they can make sure their needs are met, and their vision is communicated, but actually we were able to create the opposite of that.

But yes, we struggled! Even with all our experience and intellectual knowledge, and the tikanga feature, we're also human and have egos. We still got upset with each other.

What didn't you agree on, and how did you work through that?

And while your default is to feel frustrated, interestingly we ended up compromising. It wasn't always about reaching agreement. Sometimes one of us would have to go, 'okay, you do that because you're prepared to more strongly defend your point of view'.  And sometimes it was that simple - a case of, you believe in your point of view more than I believe in mine and I'm prepared to compromise on that'.

So it wasn't a case of 'too many cooks spoil the broth'?

Critics would argue that doing it this way diluted the vision, but for a film that's about the many experiences of wāhine Māori, and that follows a community over such a long time, it makes for a more human way of telling the story. We served the kaupapa of the film, the subject of the film, far better by honouring the nature of collaborative and community storytelling.

Sometimes filmmaking needs to be a political act: casting non-actors, shooting in a certain location, prioritising women HODs over male HODs with more experience. I believe we can do better with our numbers but everyone has to be committed to the underlying kaupapa of representation. For me, Māori representation is as important, if not more so on a project like Cousins, than female representation.

Were there any political acts in the crewing of Cousins?

We chose a Māori DOP - not a woman - because the specifics of being Māori were going to be understood by a Māori practitioner better than by a female practitioner, and that was really important in the case of the DOP. But for me, being Māori was a more significant requirement in order to understand the wairua of the story and the characters.

Sometimes it just has to be a political act to make these numbers better, otherwise we will always fall back on the 'best person for the job' fallacy.

It has to be about creating opportunity for those who have not had opportunities, and not be just about skills or experience. Experience is only a lack of opportunities.

You first have to get past the colonisation of your own mind - I'm talking about Māori and Pākehā, but also the patriarchal colonisation, and the ways these are brought into indigenous stories.

When we go to the funding organisations with a request for all female HODs for a project, we don't need to have a discussion about whether the director would be best-supported with all women HODS; that's just feeding in to the old idea that the director's needs are somehow more important than the collective needs of the group. Give us a female gaffer and we'll support her properly so she can step into this role at the top and not be constantly underneath someone.

Of course someone then has to give us the funding under those conditions!

What's next for you?

I recognise that I can't be in a leadership role for Māori women without getting my reo sorted, so this year I'm focusing on learning te reo. I'm developing a couple of Young Adult books by two New Zealand authors.

I'm also producing [WIFT member] Gazaleh Golbaksh's first feature, and I;m hoping to do more writing and directing. But in the grand scheme of things, I recognise that I'm getting old! So I need find ways to support emerging wāhine Māori storytellers. I'm interested in exploring how I can bring a lot of young Māori to the table and create ways of developing stories that make sense from a tikanga perspective.

See below for your chance to win double passes to Cousins!