WIN: double passes to A Stitch In Time 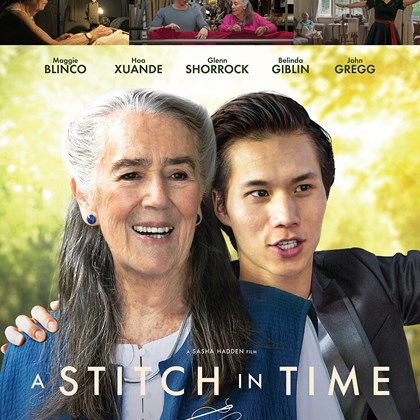 When Liebe’s partner Duncan (founding frontman of Little River Band Glenn Shorrock) loses his job singing at the local pub, Liebe throws herself into helping Duncan realise his dream to record an album.

Inspired by Hamish, Liebe decides to make clothes again to support Duncan financially, but quickly reignites a long-forgotten passion for her craft. With Duncan intent on shutting down her dreams, Liebe packs her bags and moves in with her best friend, Christine, and her unsuspecting husband, Justin, to reclaim her life and discover where she belongs.

From the executive producer of Ladies in Black and writer/director Sasha Hadden, A Stitch In Time is an ode to the power of community and friendships that come from the most unexpected places. Liebe’s touching story will remind audiences of all ages that it is never too late to follow your dreams.

There are two competitions:

1) A special advance preview screening of the film in Auckland at the Rialto Cinema Newmarket on Thursday 18 August @ 5.45pm.

The filmmaker Sasha Hadden and 88-year-old lead actress Maggie Blinco will both be there too!

2) For those who are not in Auckland, we also have 5x in season passes to give away (these are valid from August 25).

When you enter, please say which competition you're entering - 1 or 2.

To be in to win, click here to watch the trailer and answer the question below:

What alcoholic drink is not in the sewing machine manual "but strongly implied"?

Email your answers (along with a postal address if you live out of Auckland) to office@wiftnz.org.nz by 5pm Tuesday 16 August.