The filmmakers only had one day to shoot and it’s a one-shot film - no multiple takes! We asked two of Kainga’s directors, WIFT NZ members Asuka Sylvie and Julie Zhu to discuss their vignettes.

Asuka's story is about Mikasa, a mother and wife struggling with feelings of isolation and loneliness, who faces a ship that beckons her to leave everything behind. Julie directed the story about Aho, a Māori-Chinese teenager who must try and be the bridge connecting both sides of her grieving whānau together after her grandfather dies.

WIFT NZ: How and why did you get involved in Kāinga?

AS: From the first meeting, it was clear that this would be special opportunity to champion diversity, my Japanese heritage and give voice to our authentic stories - in a safe space to do so.

JZ: The producers did some shoulder-tapping to ask if people would submit an expression of interest to be part of Kāinga. Within this you had to explain what your feelings were around home and belonging and submit an idea for a story.

WIFT NZ: What were some of the challenges for you, and how did you overcome them?

AS: Adhering to just one-shot for the film was very challenging. Every move, every step the characters took had to be carefully planned out. I was warned that scenes would be dropped in the actor director workshop after walking through the script and this was true. Ten minutes goes by quickly! The one take rule forced me to think creatively about how to transition seamlessly from scenes that took place in different locations.

JZ: Covid was a huge issue and we had a number of cast and crew affected as we were filming during the peak of COVID with 22,000 cases on our shoot day. [Screenwriter] Mei-Lin Te Puea Hansen and I had to re-cast two out of three leads with only four days until the shoot and our lead actor had to not only learn all the blocking for a one-shot film within that time but also learn lines in English, te reo Māori, and Cantonese. 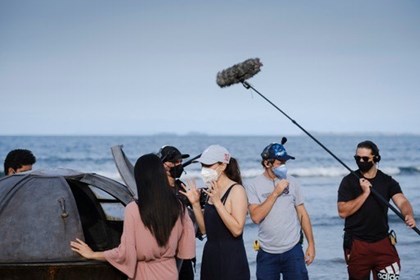 WIFT NZ: How long were you filming? Where was it shot?

AS: My segment was filmed in one day at a house in Remuera, Auckland and an additional afternoon at the beach in Long Bay to film the final sequence. The residents of Long Bay were very curious about the mysterious large prop we rolled out to the ocean!

JZ: The premise we had been given at the story workshops was for all the stories to take place in the same house so it was really great that Tafale the locations person was able to find these identical houses next to each other in Remuera. But one was much older while the others had been renovated and looked much more modern. Half the vignettes ended up filmed in the older house and half were filmed next door at the renovated house but elements such as the front door were consistent through every vignette.

WIFT NZ: What did you learn from the experience?

AS: That there is always a way forward - hats off to the producing team who were like a dog with a bone, they never gave up. We got knocked back a few times, with funding, with Covid, but now on the other side, it is a great achievement that it got made with the difficulties we faced.

JZ: I think I learnt that having collaborators you trust and work well with, people who you almost have a shorthand with because you know they understanding things the same way, is so important. I felt extremely lucky to be paired with Mei-Lin who is the most gracious, humble, and deeply considerate collaborator. At every turn and with every doubt or insecurity I knew I could turn to her. 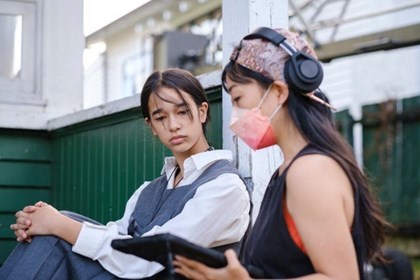 5) What do you think people will take away from your section of the film? From the film as a whole?

AS: My segment is about mental health - I hope if there is anyone out there that is struggling, know that you’re not alone. And sometimes all you can do is make it through the day and that’s okay. From the film as a whole - a little compassion and kindness for those who have taken the leap of faith making a fresh start.

JZ: I hope our piece will make audiences feel for and identify with each of our three lead women. For the film as a whole, I hope audiences see these stories and characters with the nuance and complexity in which they were written and intended. I think immigrant creatives are often pigeonholed into focusing on asserting a sense of belonging and home in our storytelling but I hope that isn't the case forever, and I hope the stories within Kāinga aren't all read with that lens. Each of the lead characters of each vignette have complex problems they are facing, which are both specific and universal. I hope audiences that watch the film don't walk out with the understanding that these stories represent each of our cultures completely, but rather are small glimpses into the complexities that make up any individual woman from an immigrant background.

WIFT NZ: What words of wisdom and practical advice can you share for emerging women directors in New Zealand?

AS: Take up space and don’t be afraid to get on the phone and hustle!

JZ: Find your community, find collaborators you love to work with, and don't burn yourself out (it's okay to say 'no').

Asuka is in development for her science fiction feature Rebuilding Julia and pilot series Thaw, which begins shooting in spring.

Julie is finishing a documentary on Meng Foon, the Race Relations Commissioner, for Whakaata Māori as well as working on Series 3 of the podcast and documentary series Conversations With My Immigrant Parents for RNZ.