Behind the scenes of Nude Tuesday

Three wonderful WIFTers are at the helm of this unique film - producer Emma Slade, director Armağan Ballantyne and writer and actor Jackie van Beek. Screening in New Zealand cinemas from 16 June, Support your fellow WIFT members and go see it!

Read on for inside info on what was happening behind the scenes of this unique film...

In an effort to rekindle the spark in their troubled marriage, 40-somethings Laura and Bruno head to a three day couples’ retreat called Wonderland, run by relationship and sexual healing guru Bjorg Rasmussen. Upon arrival, the path to their reconnection is met with hilarious and increasingly absurd farce.

Spoken entirely in an improvised, gibberish-esque language with subtitles created by contributing writers globally after release, Nude Tuesday is an utterly singular excursion into miscommunication, full frontal nudity and self-discovery.

Van Beek and Ballantyne developed five diverse concepts, and soon it became clear to both that Nude Tuesday was the project to focus on first, with Ballantyne directing, and van Beek writing and starring.

“During our brainstorming of stories, I pitched Jackie an idea about a couple whose relationship is on the rocks going away together,” says Ballantyne. “I'd always thought of it as a drama but in the great Jackie way, she quickly spun it on its head into a comedy. From there it grew and grew.”

Van Beek and Ballantyne would devise characters and plot points, then van Beek would go away and write. They enjoyed the process, but after two years of development, felt there was an element missing.

“It happened to be film festival time in New Zealand, and we were going to a lot of international films together, reading a lot of subtitles and commenting on them," says van Beek.

Ballantyne picks up: “Jackie rang me very early one morning and said; ‘Armağan, I've had this idea, but you have to come and hear it in person.’ So, at seven in the morning, I jumped into the car and drove to her house, 45 minutes away, and Jackie said; ‘I think we should do the whole film in gibberish. The actors speak a gibberish language then we have writers write the dialogue after the film's done.’ I thought it was a genius idea, brilliant, completely mad, but it tied into the themes of communication and miscommunication that we were exploring in the story. I loved it.”

“Even though I like the playful nature of the word ‘gibberish’, and we affectionately called it that, it does it a little bit of a disservice because it simplifies it,” explains Ballantyne.
“To me it's an invented language, invented on the spot by the actors almost subconsciously because it's through improvisation.”

Ballantyne, van Beek and Slade researched possible experts based in New Zealand, and discovered Perry Piercy who had trained as an actor and had recently worked as a dialect coach on the BBC/TVNZ period-set miniseries The Luminaries.

Piercy's love of language, as well as her understanding of the actors' craft, were the two elements that Ballantyne and van Beek were drawn to.

“Perry was amazing,” says Ballantyne. “She already knew a lot about language, but she delved into research and started coming up with these wonderful sounds, words and techniques. She trained the actors on the things that as a layperson you wouldn't necessarily think about, such as how to stop a sentence and make sure it doesn't flow into the next.”

“Perry really helped us create something that sounds reasonably coherent,” explains van Beek. “Although I use a lot of ‘hck’ and nobody else does, but Perry says that maybe I grew up in the mountains. But we have common words that we all agreed on, such as ‘yaah’ and ‘neh’, ‘Tula’ for ‘Thank you’, and ‘vilm’ for ‘please.’”

Selling the film to potential sales agents, distributors and funders

Firefly Films’ Emma Slade saw the co-production opportunity in the project with the other- worldliness of the gibberish opening up rich scope for talent and voices. Slade convinced Virginia Whitwell and Nick Batzias of Melbourne’s GoodThing Productions to come on board in 2018. Madman Entertainment were attached soon after and both the New Zealand Film Commission and Screen Australia then came on board too. 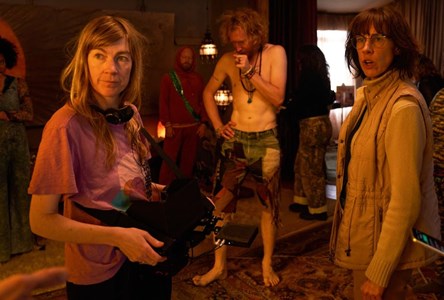 At the same time, the producers recognised that pitching the project to international sales agents and local partners was going to be challenging, particularly when during actor workshops in which improvised gibberish was explored, a lot of good elements emerged but the actors struggled to integrate with and understand each other. As the 2019 markets loomed, it became clear something to demonstrate the concept would be needed to sell the core idea and nail its mechanics.

“The proof of concept clearly demonstrated the tone of the film,” says Ballantyne, “as well as that the language was going to sound authentic, not like Swedish Chef from The Muppets.

“There's a huge amount of meaning that's going on between the actors, they are emotionally connecting to one another. The proof of concept helped us explore that as creators, but also helped us explain that to sales agents, distributors, funding bodies, and to our other collaborators.”

As suggested by the title the cast bare all, which led to the engagement of actor and intimacy coordinator Tandi Wright.

“We had discussions with the actors before they committed to a role about exactly what we were going to ask of them and if they had any boundaries around that,” says Ballantyne.

“Tandi and I collaborated closely together with each actor, because everyone has different needs around these things. We wanted everyone to enjoy the process even though it was going to be sometimes challenging.”

Ballantyne found a high icy lake just 30 minutes from the Wonderland location, so she and van Beek set the final scene on its shore – a visually arresting location and a motley crew of naked human beings.

“We wanted to devise something that we could afford, but something spectacular,” explains van Beek, “and we landed on this idea, that we were going to helicopter everyone up to this icy lake at the top of this mountain.”

“The big ensemble nude scene was always really important to Jackie and I,” adds Ballantyne, “in that it was very much about feeling comfortable in your skin and a sense of freedom with your body. The atmosphere we wanted to create in the scene was like naturalists going for a walk in the forest, there was nothing gratuitous, nothing sexualised, no crash zooms.”

Despite the simple clarity of the approach, the logistics were not so straightforward. As the New Zealand Department of Conservation only permits 50 people on the mountain at one time, once the entire cast was accounted for, adding in crew became highly complicated.

“We had to have a big costume department because they were running to the actors in between takes, giving them their robes to make sure that they were warm,” says producer Emma Slade, “and of course we needed all the other support structures, and catering as well as the technical crew. It was quite a logistical nightmare.”

In the final strategy, the production would have two helicopters – one ferrying up equipment, the other ferrying up people – which would take two hours at both ends of the shoot day.

“We were anxious heading towards it," Ballantyne recalls. "There was a lot of weather- checking, talking to the locals, looking at the scientific database, and from that a day was picked.

However, we would be on a mountain, it's very delicate, and weather patterns change. When [cinematographer] Andy Commis and I flew up first to check it out, the icy lake was not ice. We had to make a quick decision about whether to move locations or stick with our plan. We stuck with it, and started choppering in the cast.”

Cast, crew and gear ascended, the humans in sets of four in a meticulously planned movement order.

Halfway through the day, however, the weather started changing, and the pilots warned the filmmakers that they may need to come off the mountain in less than an hour.

“Armagan and I just looked at each other,” recalls van Beek. “We were only a third of the way through capturing the footage we needed. We thought; ‘we've failed.’”

Then, one of the helicopters was sent to help extinguish a fire down in the valley below. But, after an hour, the clouds kept moving over and the sun came out.

“We just managed it, we got it all,” says Ballantyne. “We finished the final shot as they were choppering the first groups off the mountain. Everyone survived. Everyone was brave – it was very cold but there was not a peep of complaint from anyone. They were incredible.”

Nude Tuesday began its initial journey by going out to distributors with two sets of subtitles, one written by Ronnie Cheng and Celia Pacquola, and another by Julia Davis. The three writers watched the finished film with no script and no subtitles and created their own interpretation of the dialogue.

“What we're hoping for, if the film sells, is to get more and more writers from different territories interpreting the locked film,” explains Ballantyne. “We're so excited to see how different cultures and different genders interpret the film, and the arguments around this couple.”