Dame Whina Cooper was a Māori matriarch who worked tirelessly to improve the rights of her people, especially women. Whina, the long-awaited film about her life, is co-directed and co-written by WIFT NZ member Paula Whetu Jones (Te Aitanga a Mahaki, Whakatōhea, Ngāti Porou), and James Napier Robinson, and tells the story of a woman formed by tradition, compelled by innovation, and guided by an instinct for equality and justice, and whose legacy as the Te Whaea o te Motu (Mother of the Nation) was an inspiration to an entire country. There were a number of WIFT NZ members in the crew and working behind the scenes, including Liz Adams, one of the executive producers

Whina is screening in New Zealand cinemas 23 June 2022, ahead of Matariki.

Whina stars Rena Owen, Miriama McDowell and Tioreore Melbourne as Whina throughout her life. It's Paula's first feature film; among her previous directing and writing credits are TV series I Date Rejects, the anthology film Waru, short films Yellow Roses and A Matter of Time, and the 2018 documentary Silent Soldiers which is about a unique method of detecting landmines in Cambodia.

Paula, who is director of Whitiora Productions, answered our questions about working on this long-awaited and important film. 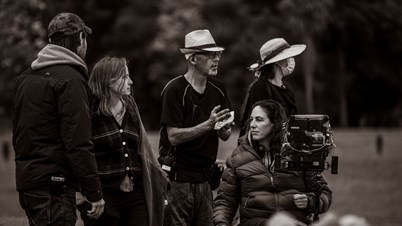 WIFT NZ: How and why did you get involved in Whina?

PWJ: I was approached in September 2019 by producers Tainui Stephens and Matthew Metcalfe to work on the film as a producer but I had reservations as producing was not the trajectory I was on. James Napier Robertson suggested that I come on as a co-director. I immediately jumped at the opportunity to work with James. I didn’t know him personally but I knew of his work, which I thought was brave and exciting. Then after a meeting with NZFC, where they indicated work was still needed on the script, James and I found ourselves, redrafting the script.

Before anything was set in stone, I travelled to Panguru to talk to Whina’s only surviving children Joe and Hine, to ask for their blessing to tell their mother’s story. They told me there were many people who had come to ask, but they had made a commitment to Matthew and Tainui and were equally happy to support James and I as well. I let them know that I was humbled and honoured and would tell her story with love, and honesty integrity. I also assured them that we all would consult them every step of the way. Joe indicated that he would like his daughter, Irenee Cooper to be his voice on the ground, which we were happy to accommodate. Irenee was brought onto the production as an executive producer and was across all departments.

I didn’t know that much about Whina, other than the iconic photo and the 1975 land march. Because we reworked the script, I did my research and this took me into her private world and the world she thrived in despite the fact, it was a world that was an extremely hostile place for both Māori and women so being a Māori woman, the cards were well and truly stacked against her.

From 1895 to 1994, she was nothing short of a powerhouse, albeit a diminutive one. I was amazed at what she had achieved and to what lengths she went to help her people who were at times her biggest critics. The path she chose, was definitely the one less travelled.

I was ashamed that it was 2019 and I was just learning about her. So, I decided, that to the best of my ability, I would help to put this iconic woman on the screen so everyone might know and fall in love with her as I did.

WIFT NZ: What were the challenges in being a co-director? How did you and James make it work?

PWJ: James and I re-wrote the script together so we didn’t go into the co-directing cold and because we wrote the script together we had developed the tone as we went, and constantly discussed how the scenes would work. How did we make decisions? James and I are grown-ups. James is more experienced than I am in film. He was extremely generous with his knowledge, which I accepted with gratitude.

We did all the recces together, the casting together, the rehearsals together, the creative decisions were made by both of us and with the directing, we talked extensively as to how the scene would play out. With regards to performances, this too was discussed before we even went on set. If we disagreed, which we rarely did because we wrote it together, then we would talk about it privately and either work out a compromise or if that failed we just got the actors to play the scene in two ways. The way James thought it should play out and then mine and then we would suss which fits the scene best in post. The communication between James and I was constant, which was the most effective and efficient way for us to make this film.

WIFT NZ: What were your aims for the film? How did you feel about being involved?

PWJ: Honoured, excited, humbled… I got to make a film about a New Zealand icon and I got to work with some of our most experienced film practitioners, like Leon Narbey, Shane Radford, Kristin Seth, Adam Martin, Gene Keelan... I obviously can’t name everyone but the whole team was fantastic. Our cast nailed their characters with grace and humility as they too knew that being in this film comes with a huge weight and responsibility. We had to get it right, otherwise we would all probably have to leave the country.

My aim for the film is that everyone in New Zealand will now have the opportunity to know who Whina Cooper was and what moulded her into the iconic woman she became. She was fearless and determined and didn’t let her deflectors (of which there were many) dictate the path she took and she never deviated from her faith or her culture as she understood and practised it. She was knocked down a number of times, but she kept getting up, right until the end. She is a role model for all. We knew we didn’t want to portray her as a ‘saintly’ character. She had flaws, which made her human and relatable.

WIFT NZ: What's involved in telling a Māori story about such an important and beloved national figure?

Authenticity, permissions, consultation and integrity. If we didn’t have these things in place, we couldn’t do anything, and like I said, we would have had to leave the country if we got it wrong.

We had a fantastic cast and crew, who just made the whole experience magical, they wanted to be a part of making this film about Whina Cooper because they knew and understood the gravity of such a film. We were true to Whina and her world, her shortfalls as well as her successes. It’s not just a “Māori” story, it’s a story about an extraordinary Māori woman, that has the potential to relate to everyone.

Whina’s whanau and community were cast as extras and some were also in the crew. One of the locations we filmed in was Panguru, we were offered the use of Whina’s clothing and jewellery for Rena and Miriama, we talked to people who knew her and we made sure the research was on point. Our reo

consultants were from the Hokianga, everything really fell into place.

A special mention to our actor Whinas, Rena Owen (pictured right), Miriama McDowell and Tioreore Melbourne, who I know would make Whina proud.

I know for a fact her family love the job these women did in portraying their mother and Nanny.

WIFT NZ: How long were you filming? How did you fit it in with other work and family commitments?

PWJ: The filming took us 36 days. We decided to film an extra scene post-filming but no pick-ups were required. We used doco footage of the 1975 land march travelling over the Auckland Harbour Bridge and arriving at the Parliament grounds. I didn’t have other work, this was 24-hours-a-day six-days-a-week for a while leading up to filming. There was nothing else happening for me, Whina dominated my life for the months leading up to filming and post.

What I did have to factor in was my mobility. I knew that I could not be on set with my regular wheelchair so I rented an off-road chair called an OMEO. But I needed to be able to get it in and out of my vehicle. The guys at freedom mobility GAVE me a van to use with a winch to get it in and out of the van. My assistant Taimana (who became everyone’s everything and appears as an extra a lot in the film) was an awesome help as everyone knows, those shoot days are long.

Next navigation was the crew, who had never had anyone in a chair on set, let alone the director, took about 3 days to know what I needed and that I was not a princess …the only thing they kept forgetting was not to put the portaloos on the side of a hill…all sorts of madness that can happen happens then!

The crew was great and soon, they did everything automatically. Of course, there were a few places I could not go, but I always had comms and a monitor. All I needed was access, which meant I could do my job.

WIFT NZ: What's next for you?

PWJ: I’m working on two historical drama scripts that are New Zealand stories, told from the Māori perspective. One story is a Witi Ihimaera story that will be translated into Māori by the gorgeous Hemi Kelly. The whole film will be in the reo. The other is with (WIFT NZ member) Sharlene George and Cliff Curtis, which is in the early stages of script development as well. I have a number of projects, including an animated feature and a black comedy series, all in various stages of development.