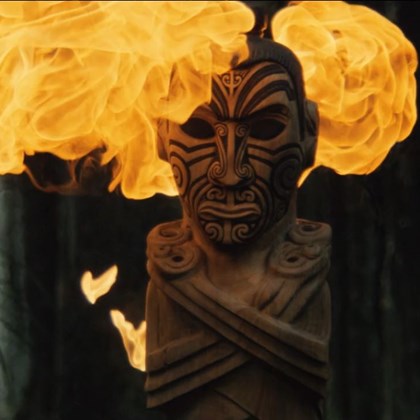 Directed by Francis Baker, the music video Ka Puta from Māori rock and roll band Kiko, really packs a punch. The South by Southwest Festival programmers thought so too, and have included it in their music video competition.

‘Ka Puta’ is a track performed entirely in te reo Māori. Francis describes it as being about “escaping the beaten track, dismantling the enclosing barriers and breaking free to find your own path, your new journey”.

SXSW and colloquially referred to as South By, is an annual conglomeration of parallel film, interactive media, and music festivals and conferences organized jointly that take place in mid-March in Austin, Texas, United States.

The members of Kiko represent the cream of bands such as Fly My Pretties, The Wreckage, Harvey Knows a Killer, These Automatic Changes and Strangely Arousing.

Their band name Kiko is short for kikorangi, the Māori word for blue, or as it is directly translated “the flesh of Ranginui” the Sky Father. The band incorporates a mix of genres to deliver a unique rock-blend sound, but as with many rock bands, guitars remain the most vital instrument.

Image: a still from Ka Puta