Katherine Wyeth on A Boy Called Piano: The Story of Fa’amoana John Luafutu 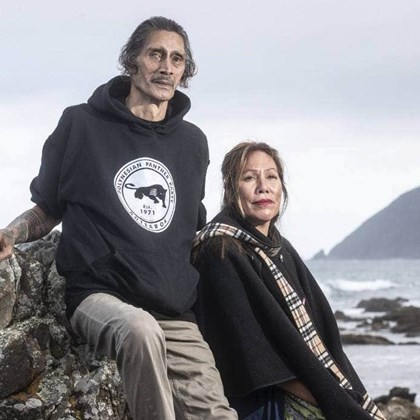 Directed by WIFT NZ member Nina Nawalowalo (artistic director and co-founder of The Conch) and produced by fellow WIFT NZ member Katherine Wyeth, the documentary tells the remarkable story of Fa’amoana John Luafutu and his time as a state ward in the 1960s. The film also reveals the intergenerational impacts of his experiences on the next two generations, as well as the healing power of harnessing his voice as a storyteller. The film blends dramatised sequences and powerful interviews with beautiful aerial and underwater photography, translating the Fijian director’s celebrated visual storytelling to the screen for the first time.

Katherine Wyeth (left) shares her experiences in making this film.

WIFT NZ: How and why did you get involved in this project?

KW: The Conch has a longstanding collaboration with Fa’amoana and the Luafutu Aiga, beginning in 2016 - with the creation of the acclaimed stage work The White Guitar, which featured Fa’amoana and his sons: Matthias and Malo (aka rapper Scribe). During the development of this work, Fa’amoana revealed stories about his time as a child in state care. This was later developed into the stage work A Boy Called Piano - which had its first development season in Wellington in 2019. I came on board as producer for The Conch at this time, and it was a privilege to stand beside Fa’amoana and his family as his story was presented publicly for the first time.

The Conch was set to tour the play when Covid struck - so Nina and The Conch team pivoted to digital and audio form: making a radio drama of the play that was broadcast on radio New Zealand in 2020, and partnering with NZ On Air, The Royal Commission of Inquiry into Abuse in Care, Te Pūtahitanga o Te Waipounamu, PANNZ and CNZ to make a documentary film about the story. I have a background in film as well as theatre, so it was exciting for me to be able to support and grow this pathway into film-making for The Conch’s debut film!

The film was completed at the end of 2021 and this year we are going through the film festival circuit and partnering with Bright Sunday to distribute the film through communities around Aotearoa, before going to free-to-air broadcast on Māori Television next year.

WIFT NZ: Tell us about some of the challenges you had to overcome in making this film.

KW: Time pressure was quite a big challenge initially! When the stage tour was cancelled - we were able to keep the investment pledged from PANNZ (who had been going to tour the work) to tell the story in another form - but we had to complete the filming during the dates that the tour was going to be, as the finance had to be used in the 2020 tax year… so we had quite a big rush to secure the rest of our production funding in just a few months.

After filming was complete we still had to raise the rest of the budget needed for post-production, first securing a broadcast platform and thereby becoming eligible to apply for NZOA funding. I had a family emergency on the day of the Māori Television application deadline, so I ended up submitting the application at 11pm from the hospital!

WIFT NZ: What will NZ audiences take away from the film?

KW: The story is really about healing. What Fa’amoana and all the thousands of children in the Boys' Homes went through was so distressing… these vulnerable children taken from their families, often for nothing worse than truancy, and then preyed upon and abused by people who were supposed to be caring for them. The intergenerational impacts of that pain on the children of survivors, and their children… Fa’amoana has had the courage to take that pain and transform it through the power of his voice, and that has led his whole family on a massive journey of healing. Nina wanted to capture that quality of healing in the process of making the film, using beautiful methods - like reverently dropping feathers over the isolation cells in the ruins of Kohitere Boys Home… this gives some of the film a kind of spiritual quality, which is beautiful and powerful.

WIFT NZ: What are some of the more memorable experiences you had making this film?

KW: It was truly humbling during the making of this film to travel with Fa’amoana as he revisited the site of Kohitere Boys' Home, where he was detained as a child - for the first time in 45 years. We captured some profoundly moving stories and interviews in this way, by taking Fa’amoana and his son and grandson to sites that were significant to his life story. But when we came to editing, it was clear to Nina that she needed more footage to craft the story in the way she wanted to tell it: using her visual artistry to explore themes of freedom and isolation.. the feeling of wind caressing skin… the elements of nature that are denied to prisoners. So we jumped back into production mode for four additional pick-up shoot days - two of which were using aerial photography and one underwater photography!

On our first day out with the drone - we hadn’t had a reply about our filming permit in time! This was a big issue so I was frantically emailing and calling all sorts of people on the drive out to Kohitere Forest. When we got there, we still hadn’t gotten a reply - and I was getting pretty worried that we were going to lose the whole day - when a jogger ran past and stopped and talked to us and asked us what we were up to. We explained our predicament and he said “Oh that’s fine. I own the land and it’s no problem for you to fly the drone and film here”. So that was a great stroke of serendipity!

WIFT NZ: What is the plan for the film?

KW: We are continuing with our festival strategy throughout the rest of this year - submitting to domestic and international festivals, with a big focus on indigenous festivals. We are hoping to premiere in New Zealand at NZIFF, so fingers crossed!

Later this year we are partnering with the wonderful Pacific marketing company Bright Sunday - who specialise in the community distribution of Pacific films in the social justice space, to bring the film directly to communities who would benefit from the story all around NZ. The screening tour is still being finalised but we are hoping to bring the film to audiences in Wellington, Dunedin, Christchurch, Hastings, New Plymouth, Rotorua and Auckland.

Next year (February 2023), the film will be broadcast on Māori Television, which will have a 12-month licence to broadcast in NZ, Australia and the Pacific.