We talked to Michelle Savill about directing, human behaviour, and about being on set while recovering from major surgery.

Michelle Savill is the creator, co-writer and the director of Millie Lies Low, her first feature film. Michelle's previous films are shorts and include Ellen Is Leaving which won best short at the 2013 SXSW Film Festival.
Produced by WIFT NZ member Desray Armstrong and Angela Littlejohn, Millie Lies Low is in New Zealand cinemas from 29 September.

WIFT NZ: What sparked the idea for Millie Lies Low?

MS: The NZFC had paid for my flights to the Clermont Ferrand Film Festival in France where my short film Ellen Is Leaving was screening. I missed my flight there, and my first reaction was, ‘I’m going to have to hide because I don’t have the money to pay for another ticket!’

A few months later as I started telling people about it, I found a lot of people were sharing similar stories, some really crazy, about moving house but for whatever reason having to pretend they hadn’t, or people getting fired but still pretending to go [to work].

Hearing these stories, I started to get more interested in human behaviour and psychology and what drives people to do such crazy things.

WIFT NZ: Can you tell us about some of the challenges involved in making the film?

MS: We were up against Covid and the shoot was shut down on day four, in March 2020. We didn’t know if we’d get the film back up, but we did, largely thanks to our producers Angela Littlejohn and Desray Armstrong, and the NZFC Production Recovery Film Fund.

Shooting under Covid regulations was extremely challenging. We had to work out how to stay in bubbles, how people could be on set and still socially distance.

And my appendix burst, putting me in hospital for about a week while I recovered. It was quite bad and I was struggling to even walk properly. Our shoot was four weeks and the normal recovery time for a burst appendix is about six weeks. By the last week of our shoot I’d gained a lot more strength. I just wanted to make the film. I loved getting up for work every day, that’s what I wanted to do, no matter what.

WIFT NZ: You’ve done a lot of commercial work; how did that help you while making a feature?
MS:  Directing commercials, you’re learning all the time, strengthening that muscle dealing with different story and worlds, with different crews, and different actors. I did all kinds of commercials – comedy, drama, one ad had a small plane crash in it. So you find yourself in incredible situations that you otherwise wouldn’t, or would take years to be in, if you just wrote a feature about it. Commercials give you experience.

Film is different in that you go deep with character and story. Commercials are 30, 60, 90 seconds, so obviously don’t need to sustain much time story wise. But in doing prep for a film you do a deep dive into every aspect of it. 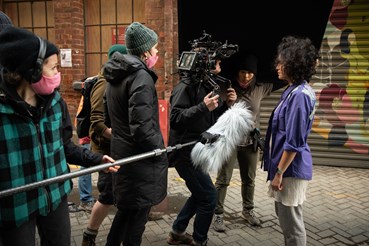 WIFT NZ:  What do you bring to a film?

MS: I’m very performance-focused. I feel I create the trust and the space to allow actors to do a great job. I’m details-oriented - I want to know everything across all departments. I work closely with HODs in the lead-up, and make sure everyone knows what kind of film we’re making. On-set I think I’m pretty chill. My style is quite quiet I think, and gentle.

WIFT NZ: You said Millie is a universal story, can you explain more about why that is?

MS: I can relate to the way Millie gets herself into worse and worse situations, with lots of missed opportunities to correct things. So many times I’ve made decisions and ended up in a hole I’ve dug for myself. Like when someone calls you the wrong name and you don’t correct them because you’re being polite and saving face, and then it leads to awkwardness further down the track...

She feels a lot of status anxiety about her social life, which I can relate to and I know a lot of other people do too. The stress she puts on herself and the self-sabotage, I think that’s relatable.

WIFT NZ:  You grew up in the Philippines and moved to New Zealand in your late teens. How has living in another culture affected your storytelling?

MS: Growing up in a culture that’s not your own, and not being a part of the culture you’re from makes you feel like a bit of an outsider. I think it’s made me quite observant of other people and the way they behave.

WIFT NZ: How did you get into filmmaking?

MS: I made a student film called Betty Banned Sweets which was well received at international festivals. The NZFC rang me, wanting to watch it and encouraged me to apply for a funding round to make another short. That lead to making Ellen Is Leaving, which won the SXSW and from there I was encouraged to think about making a feature.

I became Gaylene Preston’s assistant for a couple of years. I heard from a friend that she needed a lot of footage archived and she kept me on doing other work part-time as she was making her feature film Home By Christmas. After that I found my way into commercials. They've been my main focus, they allow me to work as a director and to work on my own projects as well.

WIFT NZ: What advice do you have for other filmmakers?
MS: My advice is to have a hobby. Something totally outside of the film world. Something that doesn't have to have an end goal, or something that you can do quickly and messily. One of mine is ceramics, I love that it is a completely separate world, it's tactile and therapeutic, and I can physically make something and finish it without thinking.